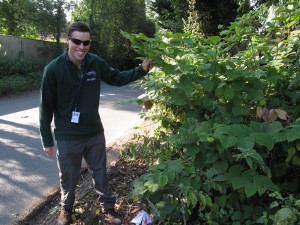 Our British Isles have successfully repelled foreign human invaders since 1066 but we have not been able to keep several armies of plants, animals and insects away from our shores.

In most cases these have had beneficial consequences for our countryside, but there are some fairly serious exceptions to this!

The Oak Processionary Moth is one of these. Originating from Central and Southern Europe it probably originally entered as eggs on imported trees. If found at your property you will need to report it or you are likely to receive a Forestry Commission Enforcement Notice requiring you to have it eradicated. There is no option but to pay for this to be done and these costs will not normally be covered under your household insurance policy.

Japanese Knotweed is another import. It is native to Eastern Asia, including Japan, China and Korea. First introduced as a fast growing background plant by enthusiastic gardeners in the mid Nineteenth Century it has become established in the UK, as well as North America. Unlike the Oak Processionary Moth, its discovery on your land does not have to be notified to Regulatory Authorities, but it is a criminal offence under the Wildlife and Countryside Act 1981 to plant it or to cause it to grow in the wild, which means that you cannot take it anywhere other than to an authorised landfill site via a licensed waste carrier to be destroyed, including the removal of contaminated soil or cuttings. As a private individual you can bury the weed on your own land provided that you check with the Environment Agency a week before or you can burn it if your Local Council permits bonfires in your area. However the only effective current way of eliminating it is by a professional herbicide treatment , which takes up to 3 years to make the plant dormant and can typically cost up to £5,000.

Japanese Knotweed is a fast growing plant that has no respect for paved or tarmac surfaces and can infest the foundations of your property, causing boundary walls to collapse and greenhouses to move. It can grow to a height of 3-4 metres in just 10 weeks and its roots or rhizomes can spread up to 7 metres horizontally.

We know of no circumstance where Japanese Knotweed has resulted in a successful insurance claim for Subsidence to the main structure of a house and without this most insurance policies will not permit claims for Subsidence to surrounding structures. However some insurers will not issue a policy that includes Subsidence where the presence of Japanese Knotweed has been declared and mortgage providers are unlikely to offer funds to applicants without one.