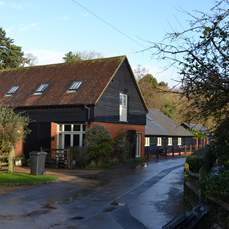 Who would not like the idea of living in a beautifully converted barn or mill and having wonderful views over the Surrey countryside? You would be surprised how many!

Agricultural buildings offer a means to increase the rural housing stock without interfering with Green Belt planning restrictions. Or do they?

In March 2015, the Department for Communities and Local Government issued new planning practice guidelines because approximately 52% of prior approval applications for agricultural to residential conversions had been refused in the period between April and September 2014. Under the Permitted Development rights issued in 2014 local councils were expected to allow farm buildings to be converted to homes without planning permission.

Mole Valley District Council has an enlightened approach towards agricultural conversions and it is a credit to the Planning Department that a holistic concept of maintaining the traditional character of the area, along with the need to find new uses for redundant properties, has continued to make our Surrey Hills such a wonderful place to live in.

But there are drawbacks to owning a converted agricultural building. Access is one, with planning decisions often limiting the amount of car parking space so as not to affect the character of the countryside. Also lack of provision may mean that internet access is often poor or not available and connection to mains services either difficult or impossible.

In addition, there is the question of whether an agricultural building close to a Listed Property also has the protection of itself being Listed. In my researches this is normally a decision for the local Council to make and often hinges on whether the property is considered to lie within the curtilage of the main property.

From an insurance perspective, the construction of most converted farm buildings render them “non – standard” as far as many mainstream insurers are concerned. For those insurers that are prepared to consider such properties, clients need first to establish the precise rebuilding costs before comparing one insurance quote to another. Some insurers offer as part of their service a free survey to look at the correct reinstatement cost of a building and also advice over fire and security protection.

Remember also that many agricultural buildings have been constructed in flood plains, so unless this has been taken into consideration as part of the conversion process, flood cover may not always be available.